One of the great aspects of golf is the individual challenges players face; not just against each other to try and win any given tournament, but against the course, the elements and the pressure of the occasion.

There are some seriously tough courses out there, testing the game of the best golfers in the world. Here we look at just a few of those that can fully test the capabilities of the world’s leading players.

The Ocean Course is a notoriously tough par 72 course designed by Pete and Alice Dye. It stretches out for over 7,800 yards and has a slope rating of 155 and a course rating of 79.1. The PGA Championship, held at the course in May 2021, was won by 50-year old Phil Mickelson who became the oldest golfer to win a major. It represents a stern test to all the leading players in the game as they seek to grind out pars.

Such is Dye’s reputation for designing extremely challenging golf courses, that he’s earned the nickname “The Marquis de Sod.”

It’s recorded that golf was being played at Carnoustie as far back as the early 16th century. The original 10-hole course, opened in 1842, was designed by Allan Robertson, assisted by Old Tom Morris. It was restructured and extended to 18 holes by Old Tom Morris in 1867. 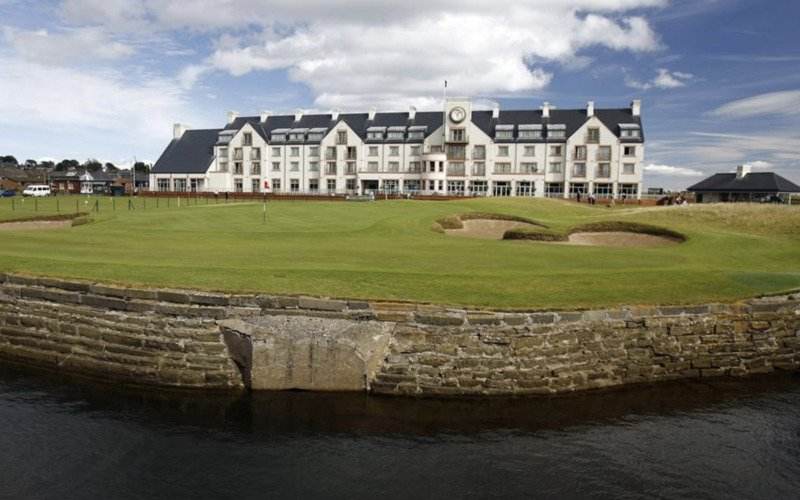 With the wind whipping in from the North Sea, the weather can make an already tough course nigh on unplayable.

The Championship course has hosted the Open Championship (golf’s oldest major) on eight occasions. Few who saw it will forget when Jean Van de Velde imploded at the notorious Barry Burn at the 1999 Open. Having led by three shots playing the last hole, the Frenchman proceeded to take seven shots to finish the hole, before going on to lose the play-off to Paul Lawrie.

“The Carnoustie effect” has even found its way into the lexicon of modern warfare, with the phrase meaning the “psychic shock experienced on collision with reality by those whose expectations are founded on false assumptions.”

Bethpage Black is one of five courses at Bethpage State Park in Long Island, New York. 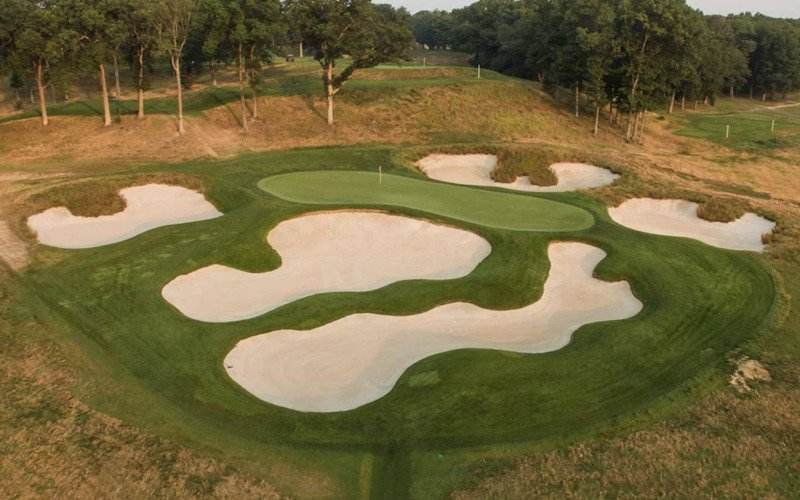 The course was designed by Bethpage State Park superintendent Joseph H. Burbeck, and opened in 1936. Burbeck was also responsible for the park’s Blue and Red Courses in the mid-1930s. The US Open has been held at the course on two occasions.

Tiger Woods was the only player to break par when winning the tournament in 2002, and only five players went under when Lucas Glover won in 2009.

Its reputation is such that there’s a sign on the first tee that reads “The Black Course Is An Extremely Difficult Course Which We Recommend Only For Highly Skilled Golfers.” 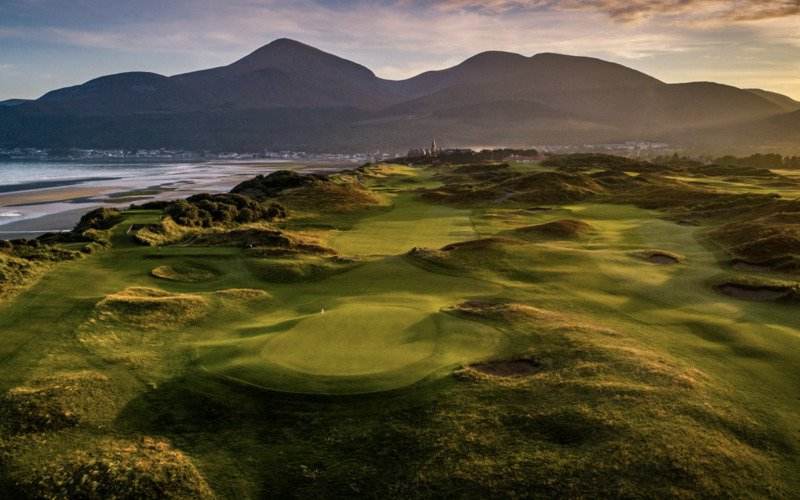 The first course was built by Old Tom Morris, who was hired for the sum of four guineas, and was opened on 23 March 1889. Further modifications were carried out by George Combe, Harry Vardon and Harry Colt over the early part of the 20th century.

Stray from the narrow fairways and it can be all but impossible to get free from the purple heather and yellow gorse. The course also features numerous blind spots, many deep pot bunkers and is prone to strong winds that blow in from Dundrum Bay. This is a course that provides a real test.

Whistling Straits is another Pete Dye-designed course built along a two-mile stretch of Lake Wisconsin. The course doesn’t feature many large trees, so is open and exposed to the wind and elements that sweep in off the lake. 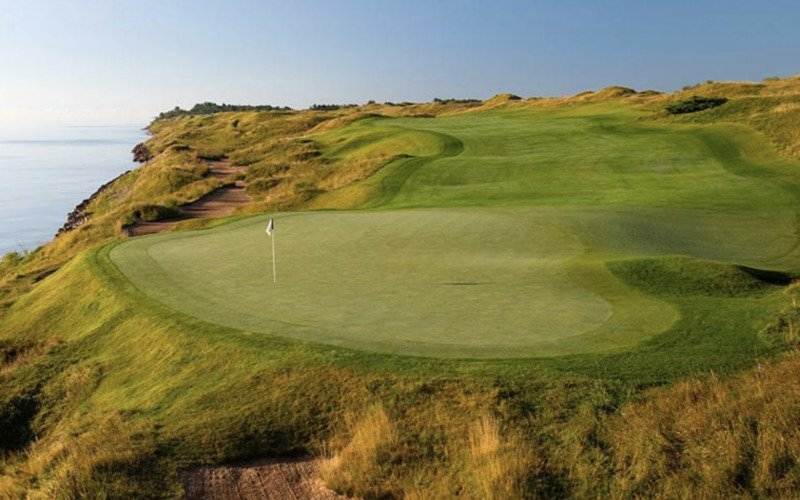 According to Golf Digest magazine, the course has 967 bunkers (an average of almost 54 per hole), some of which are barely recognizable as such.

Dustin Johnson surrendered a one-shot lead on the final hole at the 2010 PGA Championship when his tee shot landed on what he thought was bare ground. As a result, DJ grounded his club before his second shot and suffered a two-shot penalty as a consequence, and missing the play-off by one shot.

The Augusta National Golf Club was founded by Bobby Jones and Clifford Roberts, with the course being designed by Jones and Alister MacKenzie. It was opened for play in 1932.

The course also holds a unique position in the game as the host to the annual Masters Tournament, making it the only major to be held at the same location every year. Augusta is particularly renowned for its back nine, and in particular the second shot at the 11th, all of the 12th, and the first two shots at the 13th hole, which are known as “Amen Corner”.

The conditions at Augusta can change rapidly, meaning one round can vary markedly from the previous one. Swirling winds can be a huge problem on any course. When it’s dry at Augusta, it can be a real struggle to keep the ball on the greens.

The Saujana Golf & Country Club was launched by Dr. Mahathir Mohamad in 1982, with the development of the golf club beginning in 1983 and established in 1986. 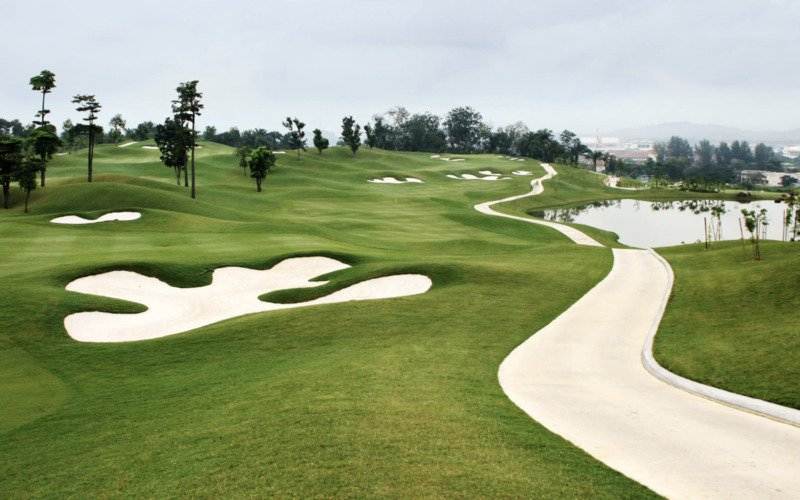 The two courses at the Saujana Golf Club (Palm and Bunga Raya) were carved out of the hills of a former oil palm plantation, where cobras were introduced to keep rats from destroying the crops. Known as one of the toughest courses in the world, the Palm Course is fittingly known as “The Cobra”.

The scorching heat is a definite issue, as are the undulating tight palm-lined Bermuda grass fairways (many lined by jungle), bunkers, lakes, ponds and ridges. The Tifdwarf grass greens are super fast and tricky.