The first Grand Slam tennis event of 2021, the Australian Open in Melbourne, has been delayed by three weeks due to the global pandemic. The men’s four-day qualifying event has also been moved to Doha, Qatar and begins on January 10.

The Aussie Open was originally scheduled to run from January 18 – 31 but new plans now mean that players will arrive in Australia on January 15 and will then have to undergo a 14-day quarantine period in line with local coronavirus rules.

The ATP (Association of Tennis Professionals) have now confirmed the schedule for the opening seven week’s of the men’s tennis season. It opens up with tournaments at Delray Beach in the US and Antalya in Turkey on January 5.

There are two other events starting in Melbourne on January 31 which will act as warm-ups for the big one. They are the relocated Adelaide International plus a reduced 12-team ATP Cup which will run from February 1 to 5. 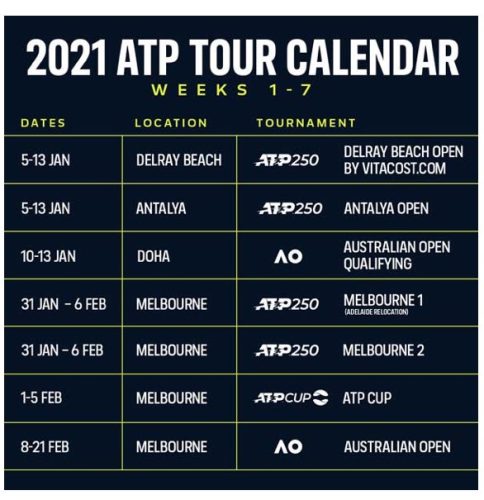 ATP chairman Andrea Gaudenzi said “The reconfigured calendar for the start of the 2021 season represents a huge collaborative effort across tennis, under challenging circumstances. Health and safety will continue to be paramount as we navigate the challenges ahead.”

What Are The Odds?

The defending Australian Open champion is Novak Djokovic who won an amazing 8th Australian title in January. The Serbian ace is a strong favourite at +110 with Bovada and with his elastic legs is very much the man to beat on the hard courts.

The American Sofia Kenin won her first Slam in the women’s event last year and she can be backed at odds of +1000 with Bovada to successfully defend her Australian Open title. She also finished runner-up in the 2020 French Open.

You can browse all the latest tennis futures here for the latest odds on who will win the Australian Open as well as the French Open, Wimbledon and the US Open which will hopefully come later in the year in their regular slots.