What is The Match IV?

The Match IV is a charity golf tournament which takes place in Montana on Tuesday 6th July. (5pm ET)

This year Buccaneers quarterback Tom Brady & Phil Mickelson will reunite on the golf course after two incredibly successful editions of The Match.

In this fourth edition of The Match, the duo will take on Green Bay Packers QB Aaron Rodgers & Bryson DeChambeau.

Who are the favorites?

There are many more special bets and props available on some fantasy sports sites such as DraftKings. You can bet on markets such as the longest drive props, longest drives on each hole, leaders after certain number of holes, first to go 1 up, first to go 2 up etc.

The event takes place at The Reserve at Moonlight Basin in Big Sky, Montana. It was built by Jack Nicklaus, lies at a height of about 7,500 feet and may play up to 8,000 yards long.

This special charity event will be an 18-hole modified alternate shot tournament. That means on each hole, both partners will tee off and then alternate hitting the same ball from the best tee shot.

Who will win The Match IV?

Last year, Tom Brady joined up with Mickelson in their Match II loss to Tiger Woods and Peyton Manning.

Aaron Rodgers, on the other hand, may be new to this format but is no stranger to competitive golf. Rodgers is a regular in the American Century Championship and finished 9th in the AT&T Pebble Beach Pro-Am in 2020. There’s no doubt about it – he can play golf! 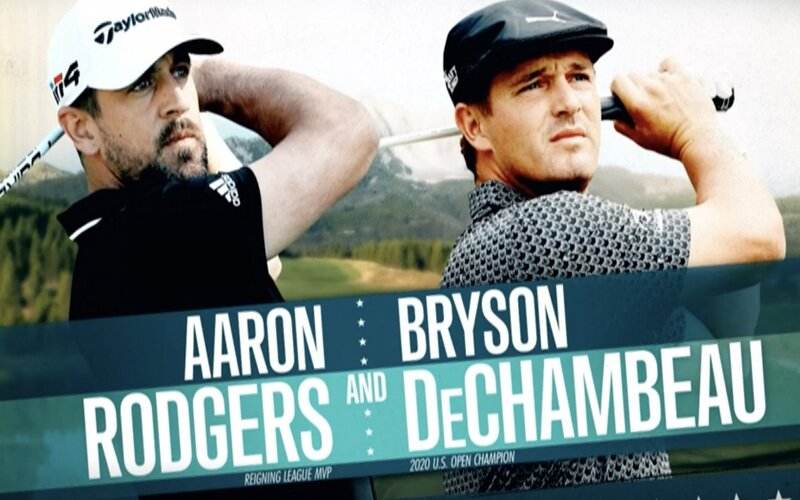 GOAT in the Rough

Brady is no slouch either, but the seven-time Super Bowl champion showed last year that he can be very hit and miss. One minute he’s holing a beautiful wedge shot in from the fairway the next he’s hitting the balls all over the place.

In the case of Bryson vs. Phil, despite Lefty’s recent winning performance at the PGA Championship, it’s difficult not to side with the younger man. The Reserve at Moonlight Basin is a monster of a course, and while the high elevation won’t allow it to play as long as it measures, who better than Bryson to crunch the figures.

This year, DeChambeau is the PGA Tour leader in strokes gained off the tee and ranks 35th in putting. He’ll put Rodgers in good positions throughout the afternoon and can cover up for him on the greens. I’m betting the favorites to win this year.

Where to Watch the Match IV?

Starting at 5 p.m. ET, TNT will broadcast the exhibition, which will also be carried on several Turner Sports networks. Each of the four players will be equipped with a live microphone, so should ensure plenty of entertainment.

* The Match IV golf odds correct at the time of article publication. All betting odds are subject to changes.